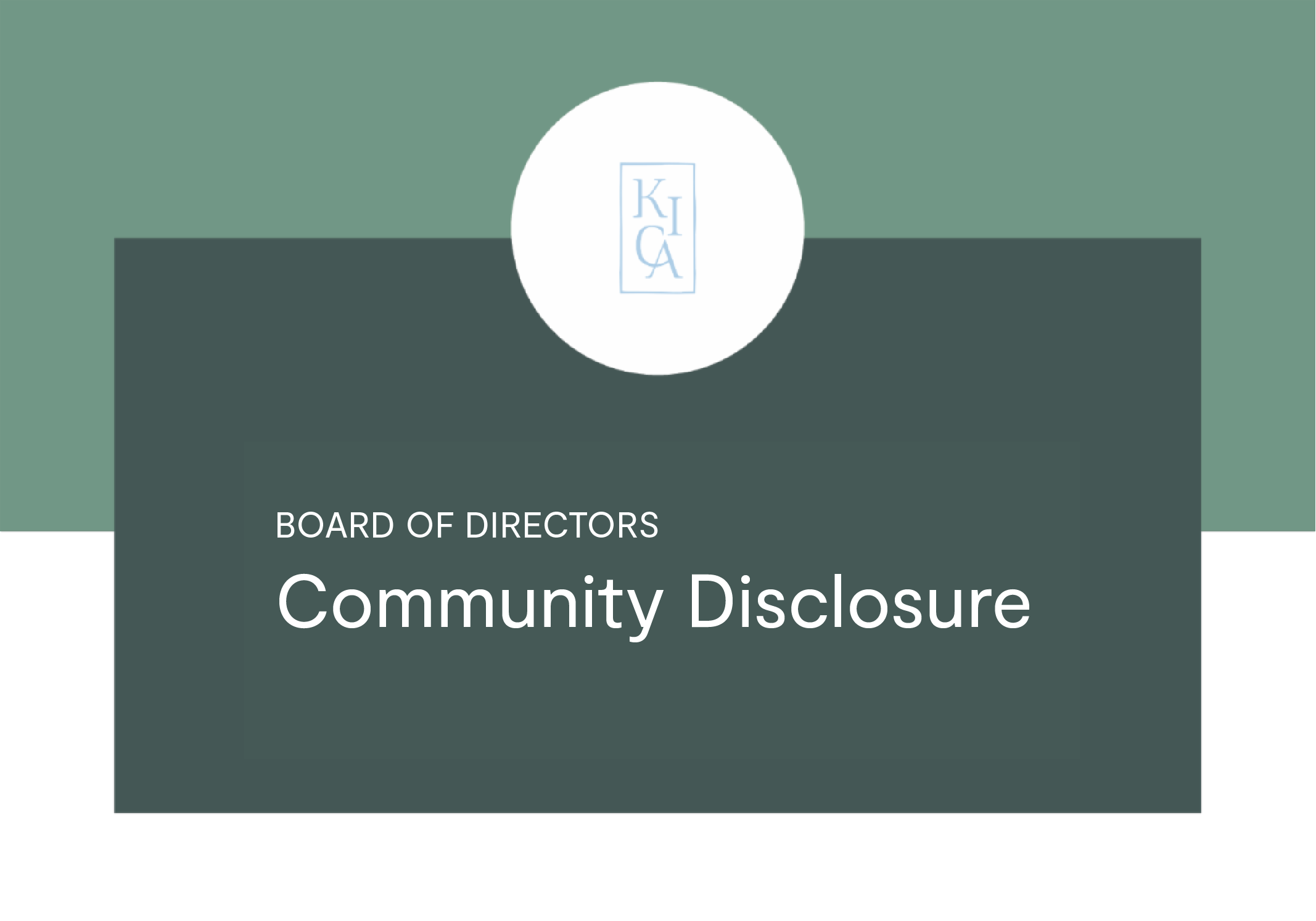 We are reaching out to you to provide some information and context about an issue that came before the board at our meeting on Monday, November 7.  At the meeting, a vote was put before the board, asking for chair Jerry McGee’s term as chair to end, after one year, on March 17, 2023.  The vote failed 3-4, as follows:

Vote For: A. Fernandez, B. McIlvain and D. DeStefano
Vote Against: J. McGee, B. Zampino, L. Mascolo and A. Mole

Had the vote been successful, this vote would have meant that Jerry’s term would not be extended an additional year, as permitted by the KICA By-laws and that two seats, rather than one, would be filled during the 2023 directors election.

The KICA By-laws state the following:

KICA By-Laws, Article III “Directors”
Section 2
At each annual meeting thereafter, the Members shall elect directors for a term of three (3) years…

The Board Chair shall be elected for a term of two (2) years… If elected Chair at the beginning of the final year of his or her term, the Director’s term shall be extended for one (1) year and the number of vacancies on the Board to be filled at the annual meeting at which the Director’s original term would have expired shall be reduced by one (1)…

A perspective has been shared that the December 2021 court decision, with respect to expansion and appointment of board members, affects this extension. To recall, the 2021 court decision was regarding two (2) newly created board seats, to which the KICA board appointed two (2) directors, who were not elected. The court ordered:

…the KICA Board is not authorized, under its Governing Documents and South Carolina law, to appoint Directors to fill newly created seats by the Board.

Chair Jerry McGee is an elected member of the KICA board, properly elected by KICA members in March 2020.  On March 11, 2022, the board members elected Jerry to his current position as Chair, which is a 2-year position. This extends his board service by one year, to March 2024. This by-law provision was revised in 2013. This will be the second time that a chair’s term of service is extended by one year.

At the request of the dissenting directors, KICA sought the advice of legal counsel. All members of the Board agreed to seek such advice and all members of the board agreed upon the legal counsel to provide such advice. Legal counsel provided KICA an opinion letter, which was provided to all board members. Based upon the opinion letter of the unanimously selected legal counsel, we, Directors Mascolo, Mole, McGee and Zampino support the extension of the Chair’s term in accordance with the by-laws. We do not believe that the by-law in question is in opposition to or in conflict with the covenants or the court case. The members elected Jerry to serve; and, the board elected him to serve as Chair.

We understand that Kiawah and its stewardship is an important topic for members on both sides of this debate. We also know that much of the conflict comes from all of our deep feelings about shared responsibility for the island’s well-being, which is the foundation of our community.

Included today, you will find a dissenting opinion offered by Treasurer Alex Fernandez and Director David DeStefano. While we may not agree with the conclusions about the action that the board should take now, it is their right to share their views with you, the membership.

In closing, we would like to say that we understand not all members will share our perspective on this issue.  Kiawah is a diverse community.  In his time as chair, Jerry has helped lead us to a more receptive and transparent community.  We are confident that he will continue to do so in his next year as chair, as he continues to lead the board of directors. We look forward to continuing to serve you.