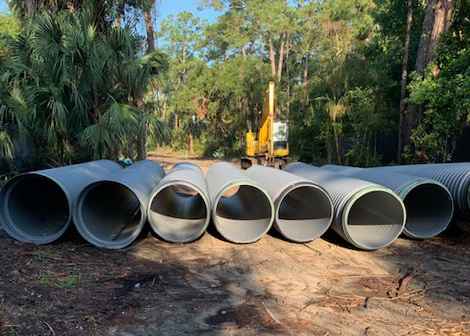 KICA has begun work on the new outfall (Project 2) at an existing inlet near Pond 30, just off of the Kiawah Island Parkway, across from the first fire station (which is currently under construction). You may have noticed construction screening along the parkway at this location. This new outfall will relieve Kiawah’s Beachwalker Drainage System, providing a second outfall where water can flow out, away from the island. Today marks the beginning of the pipe installation.

Currently, most of the western half of the island is drained through the network of ponds and pipes that outfall at Inlet Cove. Once complete, the entire Settlement neighborhood will drain through the new outfall, rather than Inlet Cove, which will resolve many of the hazardous flooding issues in the neighborhood. Additionally, by eliminating drainage from the Settlement through Inlet Cove, capacity will be restored to the system that drains the East and West Beach neighborhoods, reducing flooding there as well.

This also eliminates a known hazardous flooding issue on the Kiawah Island Parkway, which can potentially prevent access to most of the island. By relieving the system, water that formerly pooled on roads or overflowed in ponds will be able to flow into the drainage pipes and exit through outfalls.