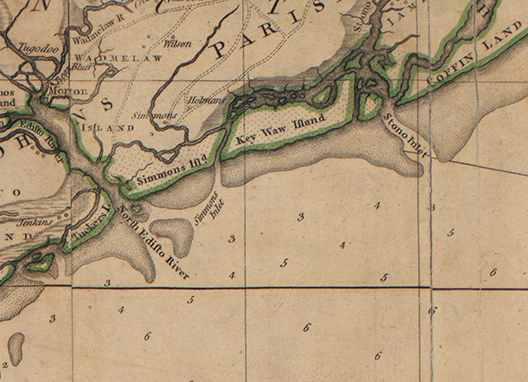 The Early Vanderhorsts of Kiawah

The Vanderhorst name is prominent on Kiawah today, giving names to KICA’s second security gate and the still-standing private plantation house on the eastern part of the island. But who were the Vanderhorsts and how did their name become such a foundational element of the island? Here we’ll explore the first of the island’s many Vanderhorst inhabitants.

The Vanderhorst story on Kiawah begins in 1772, following the death of John Stanyarne. Stanyarne was a wealthy local planter and only the third owner of the property, uniting the two tracts previously owned by the Davis and Raynor families. He passed his Kiawah estate to his two grand-daughters, the western half to Mary Gibbes and the eastern portion to Elizabeth Vanderhorst. Elizabeth’s husband was Arnoldus Vanderhorst 11, who would go on to make a long-standing mark on the island.

The Workings of the Plantation

Originally, the Kiawah plantation grew subsistence crops and raised cattle for use by the inhabitants. Indigo was grown on the island as a cash crop since the time of John Stanyarne. After the Revolutionary War, indigo prices suffered as Britain had been colonial planters’ primary market for the blue dye. According to Charleston County Public Library historian Nic Butler, “By the early 1790s, there was a worldwide oversupply of indigo dye, and South Carolina planters realized that chasing after indigo profits like they had before the war was now a futile endeavor.”

Like many South Carolina planters, the Vanderhorsts shifted their production to cotton shortly after the introduction of the cotton gin. At that time, the slave presence on the island increased considerably from around 40 to over 110. The cotton seems to have been plentiful at that time, with an overseer writing that, “The cotton Blows [opens] so fast that I cannot get time to do anything Elce [sic].”

Politics, the Revolutionary War and Kiawah

At the time of their inheritance of Kiawah, 24-year-old Arnoldus Vanderhorst 11 was politically active. He would go on to be involved in some of the most important aspects of South Carolina’s governance in the pre- and post-Revolutionary War period. After participating in the Royal Assembly, the Committee of 99 (the de facto governmental body of South Carolina during the pre-Revolutionary period) and the 1st and 2nd Provincial Congresses in 1775, he also joined the South Carolina 1st Regiment during the Revolutionary War, eventually rising to colonel under General Francis Marion.

This political and military activity put the Vanderhorst interests at risk and, when the British occupied Charleston and the surrounding area in 1780, “Lord Cornwallis ordered the seizure of estates owned by patriots and those who took part in the Continental Congress. British troops subsequently occupied and burned Vanderhorst Mansion on Kiawah Island.” The Chicora Foundation quotes Vanderhorst’s losses to the British as: “1 Dwelling House on Kiawah burnt by the British with out buildings and fences £2000,” or about $447,000 today.

It’s likely that Arnoldus 11 began to rebuild his home on Kiawah in 1801, completing it in 1802. The second structure still stands today just off of Governors Drive and is on the National Register of Historic Places. The home remains under private ownership.

Following the war, Arnoldus served in the State Senate and ran for governor of South Carolina in 1794. With a history of political influence and powerful connections to the dynasties of the Pinckney and Rutledge families, Arnoldus was elected governor but served only one term. “As governor, he supported the establishment of public schools, improvements to the condition of state jails, and criminal code reforms.”

During this time, he seems to have turned much of his attention to his properties in Charleston, where he owned a number of homes, tenements, and a wharf. Arnoldus 11 died in 1815 and passed the Kiawah property to his sons, John and Elias.