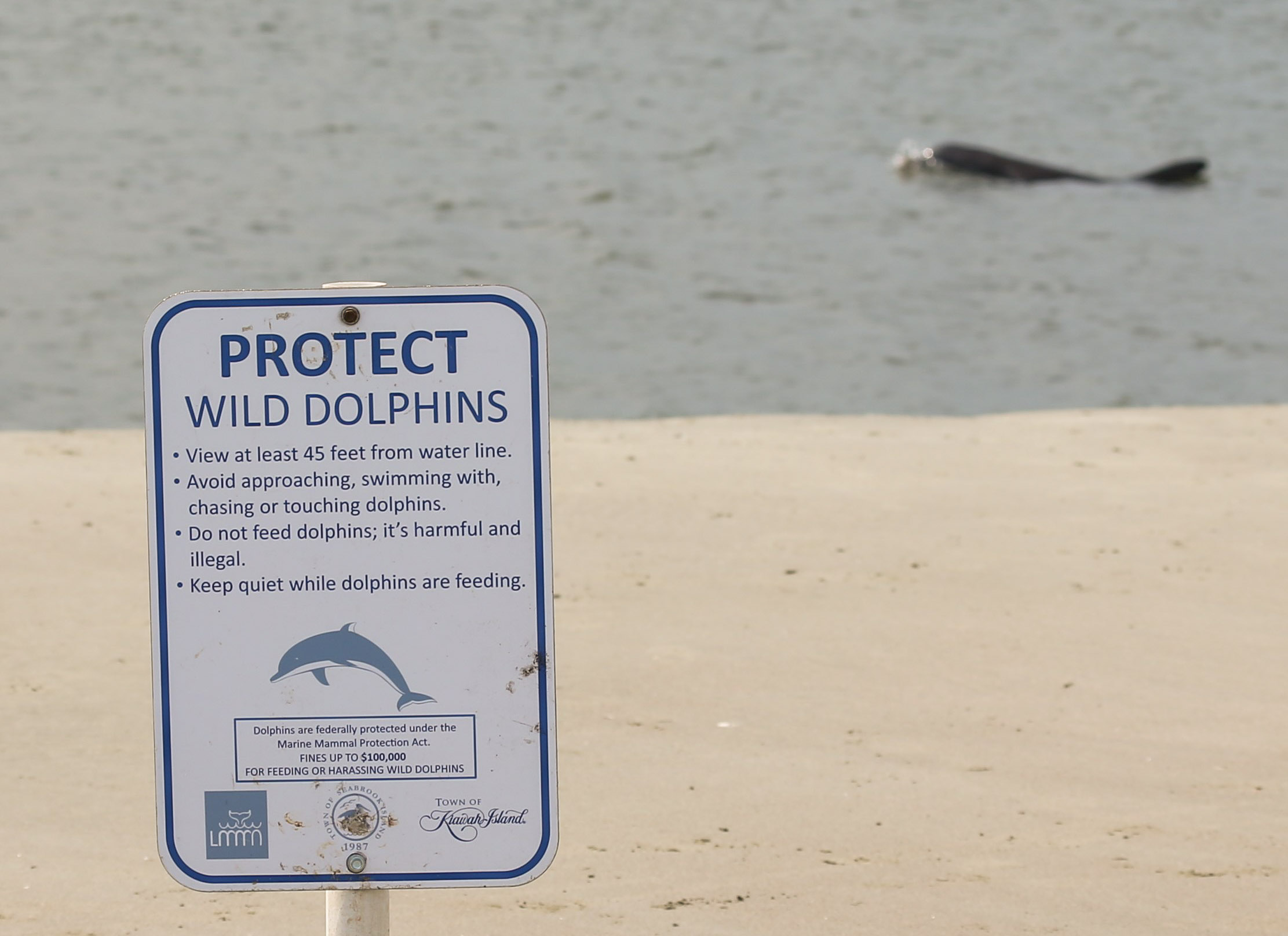 The greater Charleston area is home to 300-350 federally protected Atlantic Bottlenose dolphins. These local dolphins are known for their unique strand feeding behavior, seen only a few places in the world. The best dolphin and strand feeding viewing on Kiawah is at Captain Sam’s Inlet . . . but not all watchers refrain from feeding or harassment, both of which are illegal.

Lauren leads a team of over 40 volunteers from Kiawah and Seabrook who work at Captain Sam’s Inlet. “Protection of other Kiawah wildlife—bobcats, birds, alligators, turtles—is frequently in our minds and our news, but people don’t realize that dolphins need protection as well,” Lauren says. “A lot of studies show the need to protect dolphins from people. They can change their behavior based on humans. If people hand-feed them, they will bring their babies and teach them to beg. Bait such as old dead shrimp can make them sick. They may lose their inhibitions around boats and get hit.”

Lauren has been working with marine mammals for nearly 20 years, returning to the Charleston area about six years ago from California, where she had been working with seals and sea lions. She immediately realized that the area sported little education about marine animals, and saw a gap she could fill. Noting the high number of human-dolphin interactions, detrimental to the dolphins, Lauren asked the Town of Kiawah to help. She began the Dolphin Education program with a grant from the Town, and Seabrook chipped in the next year. Those funds provide the signs posted on the beach cautioning observers, as well as data sheets and equipment for volunteers.

Lauren uses small events to raise awareness and funds, “about 40 a year,” she says, and the two-employee organization will soon expand to three. Running an organization is still new to Lauren. “I am a scientist and have focused on research and field work, but now I am learning budgeting, grant writing, human resources . . . the works,” she said. She is pleased that Kiawah and Seabrook, now with a growing network of volunteers, have enabled her to return to research, and she is working on a paper based on data collected at Captain Sam’s.

Charleston is home to resident, coastal and migratory dolphins. They have favorite resting and feeding spots and range between the north Edisto River and Charleston Harbor. The dolphins one regularly sees at a spot on the Edisto, or at Captain Sam’s Inlet, tend to be the same. And Lauren can tell them apart. A consistent group of about seven dolphins feeds at Captain Sam’s, and some of the volunteers have also learned to distinguish among them. “The dorsal fin is like a fingerprint,” she says. “They get nicks and notches and over time develop a recognizable pattern. One has its fin almost chopped off.”

The Captain Sam’s volunteer team consists of mostly Kiawah retirees; she is “always looking for more.” The only qualification is a desire to support the dolphins, and comfort in talking with the viewers on the beach. Shifts are four hours twice a month, from two hours before to two hours after low tide. Some people split their shifts. Lauren provides training, which will kick off in April for the 2022 season. Training includes one or two virtual sessions followed by in-person training during a full shift. If you would like to join the training sessions in April, email Lauren at [email protected].

The volunteers’ primary task is education, and they engage viewers in conversation and answer questions. They also collect data on the weather, the number of dolphins, the number of strand feeding events, and the number of people they speak to, with a positive, negative or neutral rating for each interaction. Most viewers are pleasant and agreeable, but some want to get too close and personal. The volunteers encourage viewers to stand about 45 feet from the water’s edge to avoid disturbing the dolphins or obstructing others’ views of the dolphins feeding.
To learn more about dolphins, LMMN, or joining the volunteer corps, visit www.lmmn.org.