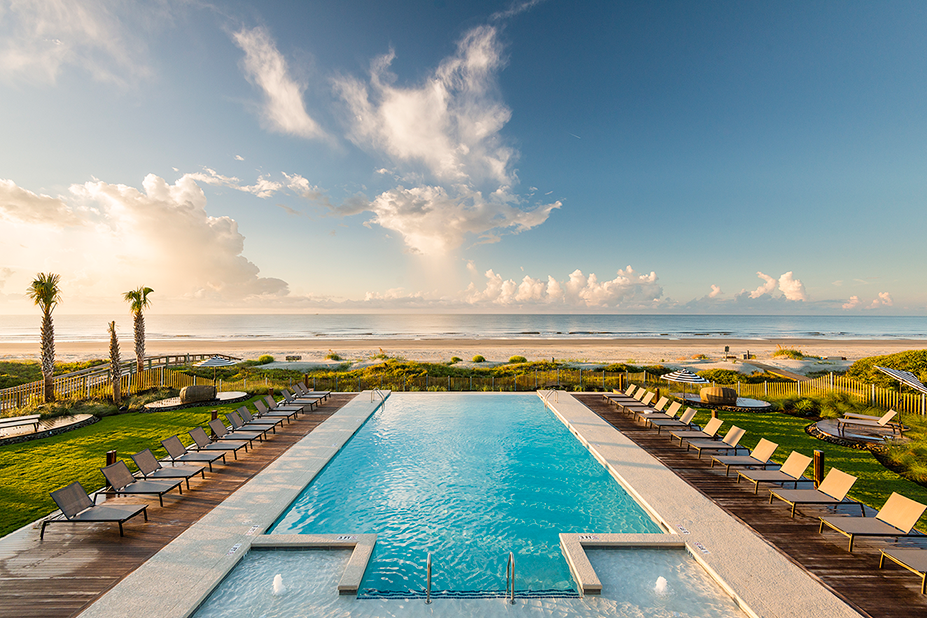 Carol Medendorp sat poolside at The Sandcastle on Sept. 21, a sparklingly clear mid-morning with a steady breeze off the ocean. Carol, a former college backstroke competitor, introduced a row of members she called “the die-hards” lounging in chairs that looked out toward the ocean. Even with the die-hards in attendance, there were only around 10 people at the Oceanview pool, but that’s likely to change with a new amenity that makes the pool even more inviting as the weather cools.

When The Sandcastle was renovated in 2017-18, a number of changes were made, including adding floor-to-ceiling windows on the first floor to give members a view of the waves from the very moment they enter the facility. But the most eye-catching addition was the Oceanview pool, with its waterfall edge and bubblers. The spectacular new amenity capitalized on the sea breezes and the wide expanse of beach that touched its greenspace. Like all construction projects with budget constraints, the renovations at The Sandcastle didn’t tackle every item on the wish list. KICA took the opportunity to plumb the Oceanview pool for heating when it was installed, but the heating equipment and ongoing heating costs exceeded available funds, so pool heating was noted as a future consideration for the membership and board.

Carol became a familiar face at KICA’s board meetings over the years. In 2019, she presented a petition with over 300 member signatures, asking the board to heat the oceanfront pool. Her reasoning was personal, but she thought it would likely apply to a subset of the community. “While Kiawah is my residence, I’m not here in the summer. [Heating the pool] would extend the use to part-time property owners who don’t feel they have to come in the summer. They could come when it’s not quite as crowded during the fall and spring times.” She was certainly not the only one with that thought on her mind. In 2019, the board had a line item placed in the 2020 budget to be directed toward improvements at The Sandcastle.

KICA’s board of directors listened to an array of different opinions on how the funds should be used. In January 2020, they sent a survey to members, presenting the different options: heating the Oceanview pool, purchasing new furniture for the family pool or replacing the wooden deck around the Castle Grille with the same IPE decking that surrounds the new pool. 1,000 participants responded, with a plurality choosing to heat the pool but no majority.

The board wrestled with the right solution. Sue Schaffer noted her change of heart at the March 2, 2020 meeting, saying, “I’m finding this very interesting because we discussed this at our orientation session. We took a straw vote and 2 people voted in favor of heating the pool and 4 people voted in favor of the furniture. I have to say that I was one of the 4 who voted in favor of the furniture but I have since changed my mind. I’m now in favor of heating the pool. We have furniture. While it’s not as good quality, and it’s not as much as we’d like, at least we have it. We don’t have a heated pool.” After much discussion, as well as comments from members in attendance, the board decided that the best way to meet the community’s need was to commit to heat the Oceanview pool and purchase new furniture for the family pool at a later date.

The heating project was finished in July, and in August, the board authorized new pool furniture to be purchased for spring 2021. There will be something new for everyone to enjoy in the coming months.

With the chilly weather in late September, the heaters were turned on Sept. 20. Carol Medendorp was there the next day, enjoying the cooler temperature and the 85-degree water. “Last week, the bike group and I biked here and met at the pool. It’s a good gathering place.” She looked out over the water. “My friends are very excited that we can do this into fall. It feels good – it’s warmer than the air today.”

The die-hards on the deck will likely have more company now. Daily pool sessions will change as the weather gets cooler, but there are currently three sessions daily for members to enjoy. The Oceanview pool will be heated through November and again in the spring. Stop by The Sandcastle to dip your toe in this newly-improved amenity.