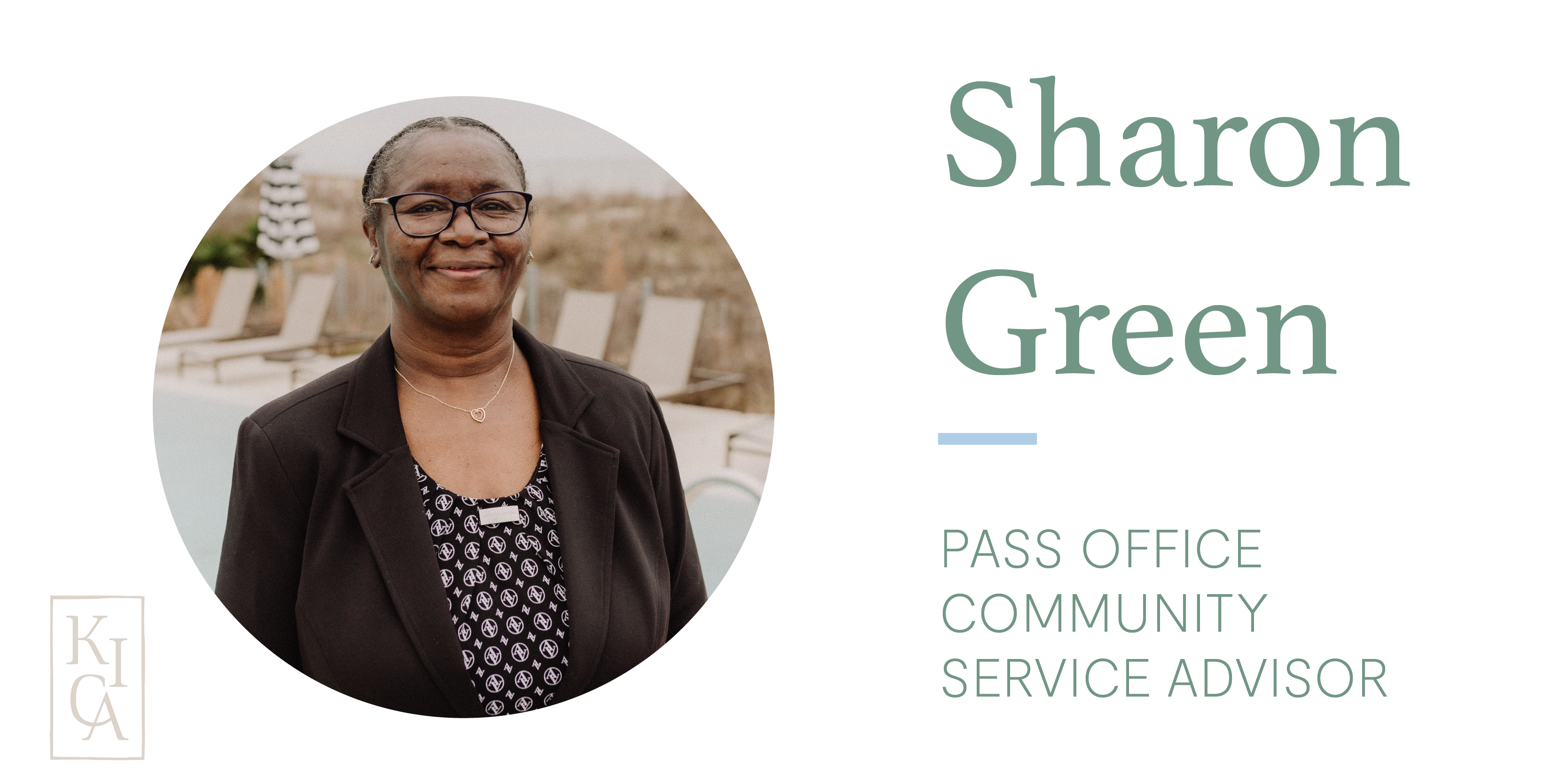 If you came to the island more than five years ago, you probably remember the familiar face above from the gate. For more than 20 years, Sharon Green welcomed members back to the island with her smile. With the association since 1996, the Pass Office community service advisor is KICA’s longest-serving employee, and she will celebrate her 26th anniversary with the company in May. Sharon has been in the Security Department for her entire career with KICA. You’ll find her now at Beachwalker Center’s Commercial Pass Office, where she issues commercial passes and decals for contractors and other island employees.

Sharon started working on the island in 1981 when the Kuwaitis still owned it. She worked at the resort in housekeeping and then as a commissary supervisor. Before KICA formed its own in-house Security team, Sharon also worked private security at the gate, which was managed for a time by the father of Carl Ritchie, KICA’s current director of Security. When he met his new team, he was a little surprised to be re-introduced to Sharon. As dedicated as ever, she was one of his new team members.

In the early days, the team worked out of trailers at Little Rabbit, but Sharon loved it. Later once the gates were built, employees worked at both gates, worked all shifts in a rotation, and did patrols. Her co-workers had a nickname for her for the way she was able to catch just about any infraction: Hawkeye. Her attentiveness speaks to her dedication, not just to ensuring that island visitors and workers follow the rules, but to the island she’s come to for the last 40 years, and the members who live here.

While the switch to the Commercial Pass Office was a big one in terms of visibility, it didn’t change her favorite thing about her job: the relationships she’s built while she’s been here. She’s become friends with members and contractors. Often when members stop by the office, they have to stop to catch up, enjoying the opportunity to see an old friend. Her co-workers are a big part of that as well, and she keeps in touch with many of the employees who’ve come and gone over her tenure.

When she’s not on the island, Sharon likes to spend time working in the yard and with her family, who are very close. She’s got nieces and nephews in the area and in Alabama. She’s also a sports fan. At KICA’s Annual Meeting on March 11, COO Shannon White introduced Sharon and noted her incredible achievement. She also said that, “There’s only one negative about Sharon: she cheers for the wrong college football team. She cheers for Bama.” But the Bama fans in the audience disagreed, and rallied with a cheer of support.

Sharon’s other passion is barbeque. She has a large pull-behind grill that she takes to family gatherings, get-togethers and church events. She likes to barbeque a little bit of everything but her favorites are ribs, chicken, and boston butt. Her barbeque is in demand too: when we talked in early March, she already had a Mother’s Day gathering booked. Taught by her little brother and with a prize-winning cousin, you might say she’s got barbeque in the blood. There may be prizes in Sharon’s future too, as her family has been trying to talk her into entering contests.

Asked what keeps her coming back each day for so many years, Sharon is thoughtful. Eventually she says, “I just love it.” She mentions the friendships she’s made over time, those connections that grow deeper and stronger, like roots. And after 26 years with KICA, and a total of over 40 years on the island, she’s making more of them every day.