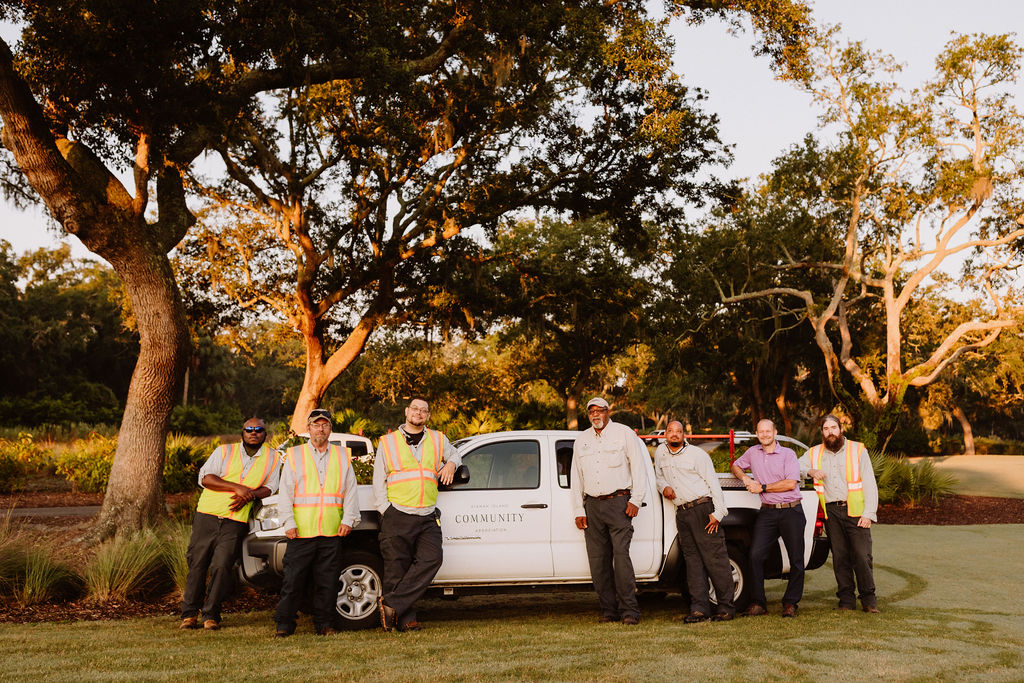 In August of 2019, KICA welcomed its first new director of Land and Lakes Maintenance in over a quarter century after longtime director Dave Achey retired. Doug Walter (second from the right above), previously the director of Grounds at the Forest Creek Golf Club in North Carolina, came with some innovative solutions in mind to address some of KICA’s long-standing challenges. We checked in with Doug to see how his first full year went and get a look at his plans for 2021.

When Doug came on board, he mentioned goals for two topics that promised to stretch into the future: Kiawah’s challenging labor market and improving resource management, specifically for water usage on the island. We’re thrilled to report that those ideas translated successfully into new practices in the association.

A GO-TO TEAM COMES TO KICA

If you’ve been to a budget meeting over the past few years, you’ve heard about KICA’s difficulties hiring and maintaining qualified staff for many positions. Larger departments, such as Security and Land Management, have struggled when housing costs in the area are higher than the average worker can afford. Many employees drive in from other areas, like Summerville and Ladson, and prospective candidates may drive past positions that offer comparable wages on their way to Kiawah. With this in mind, Doug took the initiative to integrate a program that he’d had success with before: utilizing the H2B program to get workers to the island on a seasonal basis. Doug’s team of six visiting workers was a success. The H2B team started in May of 2020 and were assigned specific projects. They worked on seven cul-de-sac renovations, the Beachwalker Center refresh, as well as picking up work when team members were out during the pandemic. “They ended up kind of being the go-to team for projects,” Doug explained. “KICA spends a lot of its resources hiring contractors to do installation for projects. Having that dedicated team helps our dollar stretch further. The board has generously allowed us to bring them back and when they return in March, we’ll also get two more to add to the team.”

STEWARDSHIP OF EVERY DROP

Coming from the golf course management world, Doug was used to thinking about water usage from a conservation standpoint. When he developed goals for 2020, one was to reduce the department’s usage of irrigation by 10% over the course of the year. Doug is happy to report that he met that goal and is trending a little better than planned. While it certainly helped that the area received more than the predicted amount of rainfall, Doug and his team put several initiatives into practice to ensure they met their goal. The first of these is rainfall sensors on irrigation. These sensors are on irrigation infrastructure around the island. If a sensor registers ⅛ inch or more of rain, it will shut off the next watering cycle. This is a great way to make sure we’re taking advantage of our natural resources and not wasting finite irrigation money where it isn’t needed.

However, Doug points out something that we’ve all experienced on Kiawah: it rains heavily in one section of a trail, park or even a property but take a few steps away and it hasn’t rained a drop. In a scenario like that, irrigation sensors in a wet area can sometimes shut off irrigation in a dry area. His team is on top of that too, with a tool that Doug brought over from the golf course: a portable moisture meter. The meter measures volumetric water in the soil to a three-inch depth. “We stick it in the ground to determine if water is penetrating. From there, we can tell if we need to adjust the irrigation in the area.” This practice also acts as a failsafe for island irrigation, which is mostly run in the early hours of the morning when staff is not on the island. Staff can check the soil moisture level to confirm that irrigation is running properly, even when no one has witnessed it.

Another tool in Doug’s toolkit was a surprise solution for an underappreciated problem. Imagine you have a houseplant that doesn’t need frequent watering. When you do water it, the water just sits there on the soil before slowly absorbing in. The reason for that is surface tension. Soil naturally has surface tension and it can get stronger the longer it goes without water. If your imaginary plant were outside on Kiawah, that water might not just sit there until it absorbs; it might move along the watershed and enter the drainage system, where it can’t be used by the plant at all.

Doug’s team uses surfactants to break down that surface tension, getting more mileage out of rainfall and irrigation. They apply surfactants on a regular basis, about once every 30 days. These non-toxic and biodegradable compounds have helped make a large impact on the department’s water bills. This was also helpful during the larger rainfall events we had in 2020, because more water was able to absorb into the soil more easily. “We would much rather rainfall be used for irrigation than have it run off into the drainage system,” Doug explained. “The goal is to use resources as wisely as we can.” In 2021, Doug’s ambitious goal is to get the most out of every drop, and reduce water usage by another 10%.

2021 is an incredibly big year for the island and Doug has a few areas of focus beyond the department’s routine work. 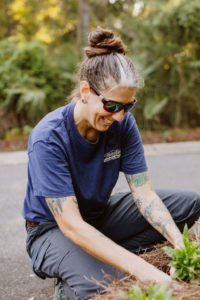 Like many island employees, Doug’s goals for 2021 have been clarified by the May PGA Championship. With camera crews and the possibility of spectators from across the nation converging on Kiawah in May, it’s an exciting time in the Land Management Department. “We want to showcase the natural beauty of the island, not too formal but maintaining an understated elegance. In everything we do, we want to promote sustainable practices, blending colorful tropicals with foundations of native plants,” remarked Doug. In 2020, crews tackled landscaping updates throughout Kiawah’s visually prominent interior corridor, getting various cul-de-sacs down Governor’s Drive camera-ready, as well as turf renovations. Switching out fussier St. Augustine for heartier Zoysia is another water-saving move. Zoysia needs less irrigation, and, without the pest pressure of St. Augustine, fewer chemicals are needed to keep it healthy and looking great. Some of these renovations have been completed with more on the way after the PGA.

Land Management Supervisor Leila Gable has been planning the colorful, eye-catching plants that will start going out around the island after the frost risk has gone for 2021. Leila picked plants in colors similar to those that appear in the PGA’s logo: white, gold and deep blue. A few of those plants are Regina Iris, Pandanus and Golden Shrimp Plant with many others on the list.

The goal is to be done with planting by Mother’s Day weekend, giving the team time to tweak and add things before the big event. Doug is confident in his team’s ability to deliver great results, saying “This will be Leila’s second PGA and she’s an expert in her area. A lot of the team will be on their second PGA. I’m confident in their expertise; I’m confident in my team.”

About three weeks after Doug joined the KICA team, he got what he calls his first “ground zero” experience with a hurricane when Dorian brushed the coast of South Carolina. Kiawah was lucky to have missed a direct hit, but the following debris cleanup was a weeks-long effort. The department has a checklist that they go through for island preparedness when a storm is imminent but some things can be done in advance. One that makes a big difference is pruning of weak limbs. “We have an arborist who works with us, and we’re always on the lookout for those limbs and try to be proactive with that. He’ll come out if we see problems but we also have a schedule for 2-3 days a month, depending on the time of year. We keep a list and work through side streets and main streets. It’s slow work; to go down the island and then back again takes about 4 years.” Pruning will be a priority again this year, especially in the months before hurricane season.

We look forward to catching up with Doug and his team as those projects progress in 2021.