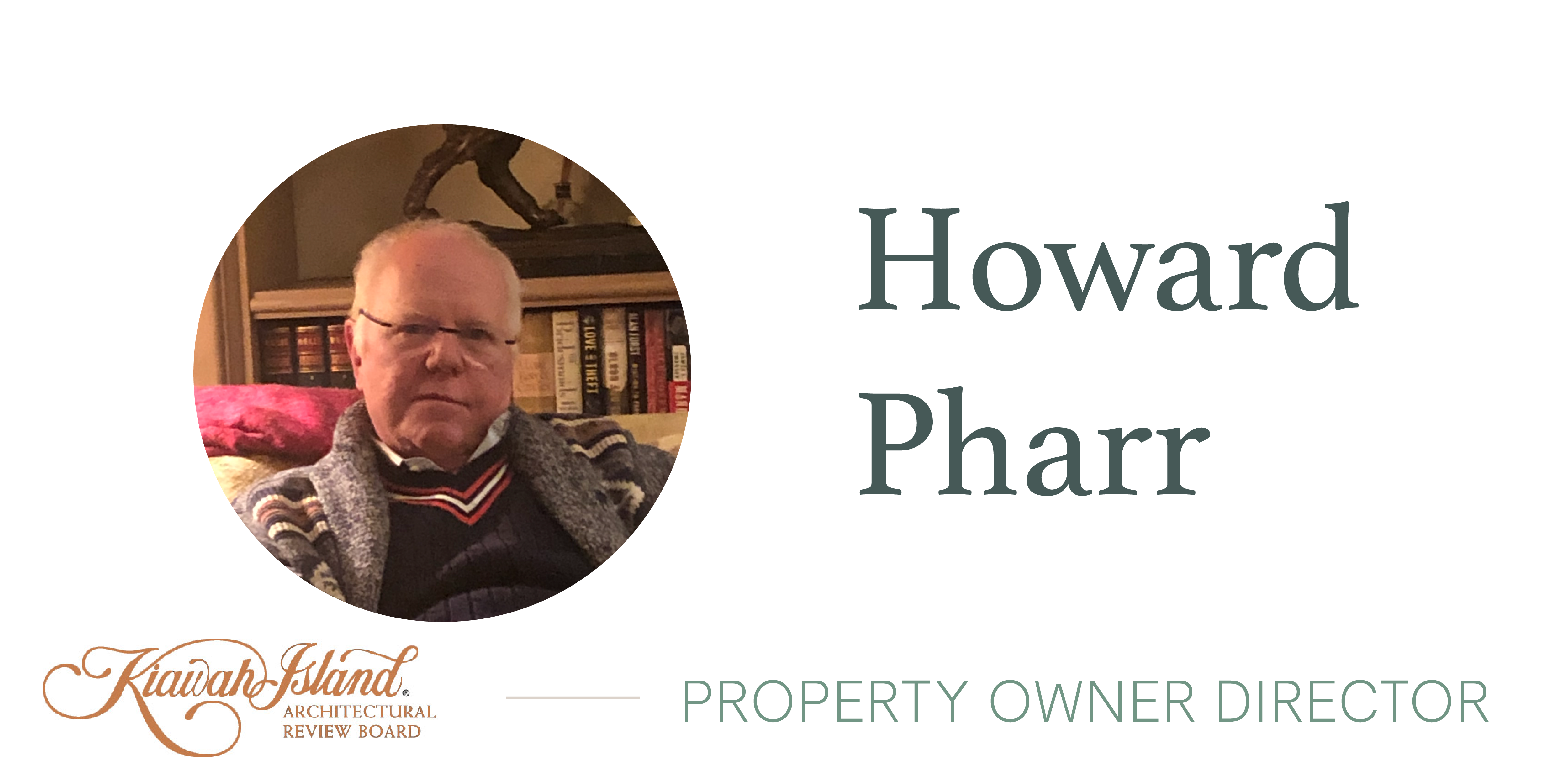 For almost 50 years, the Kiawah Island Architectural Review Board (ARB) has guided three Kiawah companies in sustainable development through environmentally sensitive design. While property owners and the ARB don’t always see eye-to-eye, the ARB’s goal is to ensure that Kiawah structures blend with Kiawah’s natural beauty. It adheres to standards first developed by the Kuwaiti-owned developers in the 1970’s, which are updated from time to time as new materials emerge and new neighborhoods are built. The developer (Kiawah Partners) appoints five of the six ARB members, which include Howard Pharr who represents Kiawah Island property owners. KICA Director of Livability Ed Monahan serves as the KICA representative. Howard has completed four years of his two three-year terms and is an experienced and a valuable source of information and support for Kiawah property owners looking to build or remodel.

After graduating from Georgia Tech with a BA degree in Architecture and spending ten years in the field, Howard transitioned into interior design. He designed the interiors for the executive floor at the Coca Cola headquarters building in Atlanta and discovered he enjoyed interiors more than architecture. “Commercial interior design was fun. I could effect architectural changes in order to make my design work,” he said. He spent the next 30 years at the design firm Hirsch Bedner Associates, eventually working his way up to managing partner and then, about halfway through his career there, president of the worlds’ largest hospitality design company.

One of Howard’s design projects was the new Sanctuary Hotel. He had never stayed there, but one weekend the resort “comped” him a room. It was a rainy Saturday, and to pass the time, he stopped by the real estate office to see what was there. Six weeks later he was a Kiawah homeowner, and a few years later, he “won” a drawing for a lot in Ocean Park, where he now lives in a home of his own design.  As a Kiawah resident, Howard supports the work of the Kiawah Conservancy and he enjoys gardening, biking, reading, and participates in Turtle Patrol with his wife Helen.

Howard’s experience with the ARB has been positive, and he thinks that a reason people love living on Kiawah is the ARB commitment to beauty, following the guidelines from decades ago and trying to nestle houses into their environment. He says that the ARB makes good suggestions for minor changes that improve houses; board members are always polite in dealing with homeowners; and most homeowners are appreciative of the suggestions. He acknowledges that ARB decisions are sometimes imperfect: “We are not infallible. Sometimes you wish you had made a different decision, and you can at least decide to do it differently the next time.” It is important to remember that each house is unique in its setting and that different neighborhoods may have different design guidelines.

Howard’s time commitment requires two meetings a month and occasional visits to lots or houses under construction. Significant projects like Timbers Kiawah, The Cape, or a new West Beach hotel tend to require a little extra ARB time. The ARB approval power is limited to aesthetic reviews; deviations to ordinances have to go before the Board of Zoning Appeals.

Kiawah property owners can come to Howard for advice before a plan goes to the ARB. He can encourage owners to make minor adjustments, such as adding more detail, or to have an alternative ready for something unlikely to be accepted. He has suggested a particular placement of a driveway so that it wouldn’t become an ARB issue. He worked with homeowners on the back side of an oceanfront “flag lot” who were concerned about a new house that would negatively impact their views, assuring them that at least the size and quality of the new house would complement the neighborhood. Views are taken into consideration, but neighbors do not have veto power over each other’s home design.

Howard also pays attention to preserving the exterior environment. “Pine trees close to homes make some owners nervous,” he says. “I am not a fan of cutting pine trees down. Eagles and Ospreys usually nest in them, and the pine tree provides needed shade for the young oak tree.”

Asked about local architects versus those from out of town, Howard notes that working with a local architect can save a little time because of the architect’s familiarity with what the board prefers or won’t allow. “An outside architect needs to read the guidelines carefully and sometimes will miss something or not understand the reasoning behind a requirement,” he points out, adding, “The ARB welcomes good design from all architects, local or not.”

Howard finds his work a lot of fun. He says, “I like getting a preview of what is being built and I feel I have something to contribute. I’ve never liked to make waves and I just wish we could say ‘yes’ to everyone.”