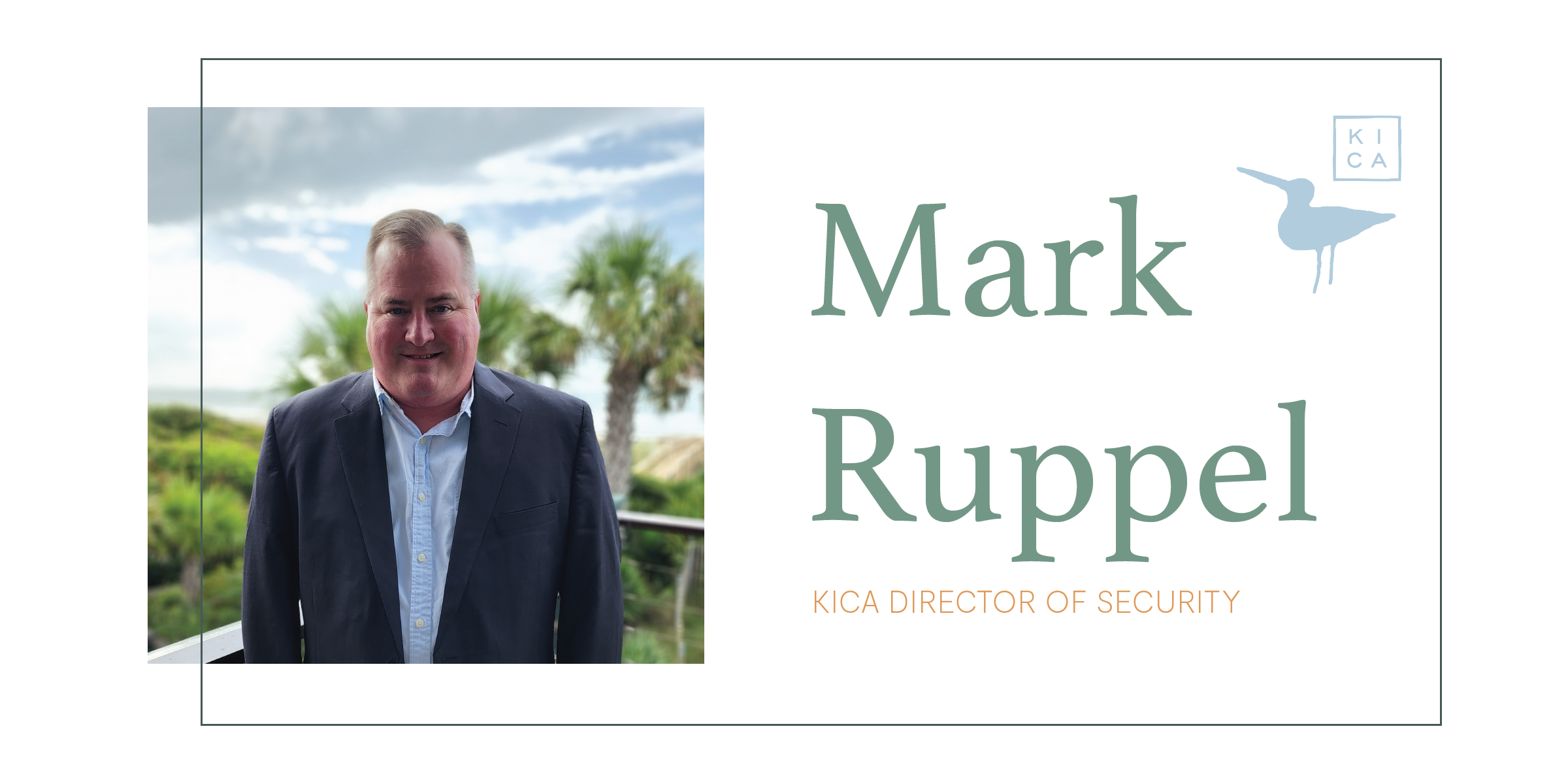 KICA’s new director of Security, Mark Ruppel, isn’t new to KICA at all. Mark, a highly-experienced public safety command staff member with decades of experience in emergency management and catastrophic planning, has served as assistant director of Security for three years. During that time, he’s put his wealth of knowledge into action with thoughtful consideration for both members and employees.

Prior to joining KICA, Mark held several high-level positions for local municipalities. He served as the catastrophic planner for Charleston County. His role focused on county-wide planning for things like tornados, earthquakes, pandemics, and, of course, hurricanes. During his time with the county, he took on the task of updating evacuation procedures to meet the needs of the increased population. Following Hurricane Floyd, which eventually made landfall in North Carolina, Mark’s team worked to improve county planning ensuring all county residents were able to evacuate safely.

The tragic Sofa Super Store fire that killed nine city firefighters in 2007 led Mark to a different kind of service when City of Charleston mayor Joe Riley asked him to help improve and enhance the Charleston Fire Department and address the national scrutiny that the department was facing. As public information officer (PIO), Mark, who became a firefighter in 1987, was deeply involved in the recovery of the fire department.

Later Mark was able to put both his experience in public safety and emergency management to use as an emergency manager for the City of Charleston. In this role, Mark worked with all public safety, as well as local media and residents. In 2015, Mark worked closely with then-deputy police chief (and KICA current director of Operations) Tony Elder during the response to the Emanuel AME shooting, in which nine congregants were killed. This tragedy turned the national and international eye on the city, and Mark handled countless media inquiries, as well as led the coordination for the presidential visit by Barack Obama for Rev. Clementa Pinckney’s funeral.

In 2016, Tony Elder joined the KICA team as director of Security. As he was evaluating the needs of his team, there was one person he thought KICA could really use: Mark Ruppel. Tony reached out to Mark and asked him to join the KICA security team as assistant director of Security. He thought the job would be “a slower pace from the city.” While the pace didn’t turn out to be slower, Mark is grateful for that. In his time with KICA, Mark has maintained relationships with local agencies, such as the South Carolina Law Enforcement Division (SLED), Charleston County Sheriff’s Office, St. John’s Fire District, Charleston County EMS, Charleston County Consolidated Dispatch Center, and the Charleston County Emergency Management Division. He also works directly with his counterparts at the Town of Kiawah Island and the Kiawah Island Golf Resort. He will guide his team to excellence, but Mark is also excited about coordinating with other KICA departments. “KICA has great people on staff all over the organization.”

From his earlier work, one of Mark’s many strengths is emergency preparedness. The town takes the lead in the event of an emergency, but all island entities work in conjunction. “If there’s a storm approaching, a week to 10 days out, we’re coordinating, preparing as if it’s coming.” As the area’s population has increased and new owners have come to the island, Mark worries that the past two years with no severe storm threats might cause complacency. “I want people to be aware and have a plan. We’re isolated out here. I was here for Hurricane Matthew. People don’t realize how quickly your conditions can deteriorate and then it’s more than an inconvenience.”

Preparedness is something he takes into his home life as well. His 15-year-old daughter Rowan is learning to drive, and he says, “I’ve taken her out in every condition to make sure she’s prepared.” Mark and his wife Megan, a breast cancer surgeon at Roper St. Francis, have two daughters: Rowan and thirteen-year-old Riley. Rowan is in track and field, and Riley plays basketball. Mark tries to make time to attend their meets and games. The family also has two dogs, a puggle named Fripper after Fripp Island and a two-year-old dalmatian named Remy. He’s ready with pictures of the dogs on his phone, and the dalmatian is a reminder of the career he moved on from: firefighting. Mark remains a volunteer firefighter with the Town of Mt. Pleasant. “Volunteers don’t run into burning buildings in Mt. Pleasant, but I help them out with some of the safer things, like grant writing and public relations. I’ve always really had a connection to the fire department.” Outside of work, Mark loves cooking with his family and exploring the local culinary scene with his wife. The family just returned from a five-day rafting and camping trip down the Arkansas River in Colorado. “We try to totally unplug once a year.”

For the Security Department, building up the staff is the continuing challenge, as organizations across the country are seeing. Mark plans some robust recruitment in the future. “We have a lot of great, dedicated people in Security so I don’t envision any drastic changes. It’s a long 12 hours, it’s hot, but members are generally very appreciative to the staff. I’d like to see the gate processes run a little smoother and we’re actively taking steps now to achieve that.”

Part of Mark’s new position is working as the staff liaison for KICA’s Security and Enforcement Task Force, which was established in 2021 to improve pedestrian safety, refine collaborative enforcement strategies between island entities, reduce traffic congestion and communicate rules to island visitors. This task force is co-chaired by board directors, with participation from KICA staff, as well as representatives from the town and resort, and several community members. The role will give him a chance to do some of the things he does best: listen to different perspectives, consider their issues and find actionable solutions. It’s an offer he makes to all KICA members, saying, “I’m here and willing to listen.”