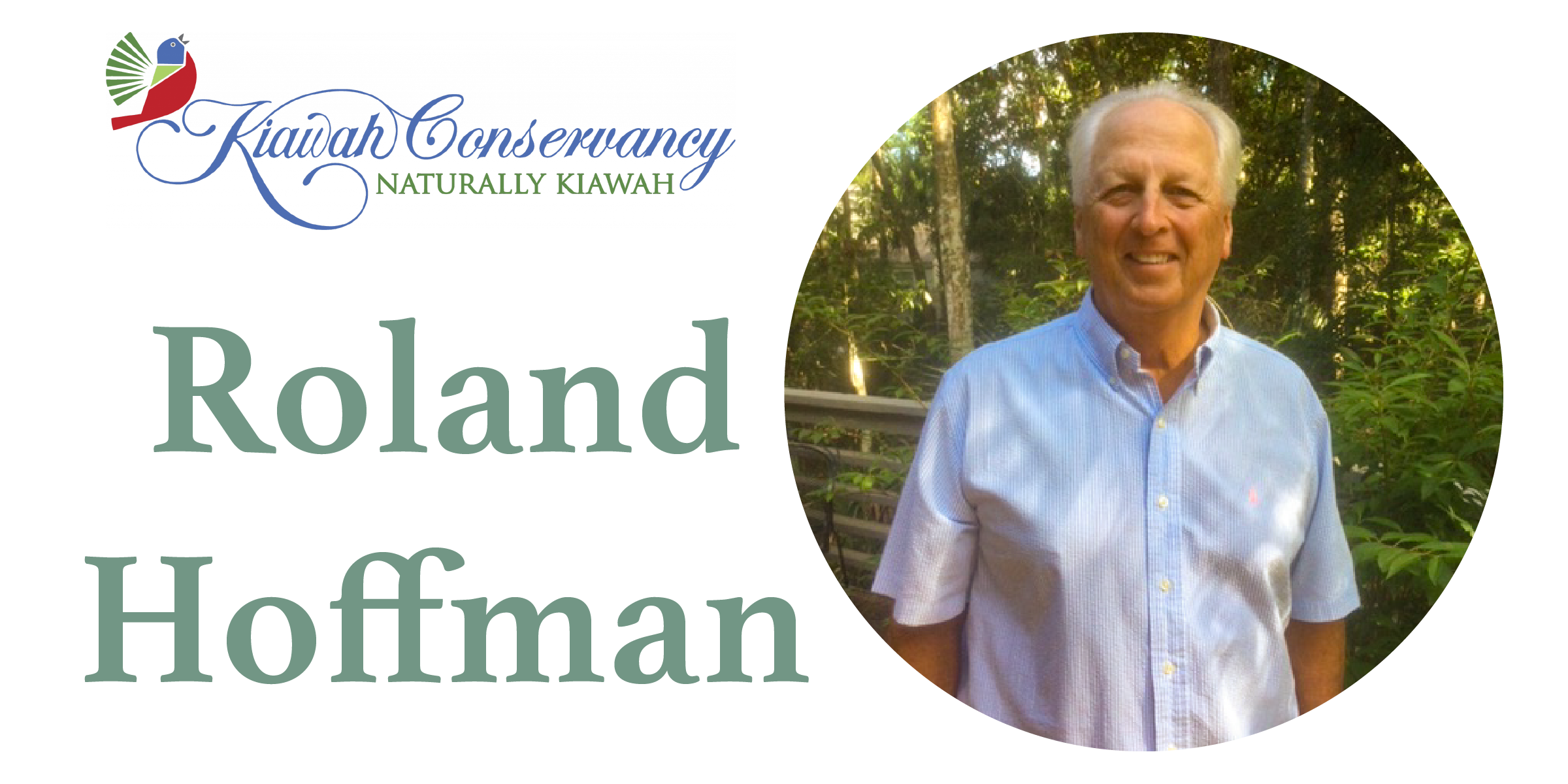 The Kiawah Conservancy’s mission is to measure, manage, improve, and advocate for the ecological health of Kiawah Island and its environs. Although Conservancy chair Roland Hoffman had no prior background in science and no previous volunteer history in conservation, he has proven to be an asset to the organization throughout his years of service.

Roland’s professional life involved a different type of protection, protecting companies from financial loss due to criminal activity such as fraud and embezzlement; and his prior volunteer work on Kiawah was also in the financial realm. His business skills have benefited the Conservancy while he has been able to rely on the Conservancy staff, researchers, and other board members for conservation expertise.

“I am not involved in day-to-day operations. We have a great staff and great board,” he said. “The board members have different backgrounds and some have professional environmental expertise. The staff is headed by Donna Windham; there are six other full-time employees plus interns. They know the science and the research. One young staff member has been teaching a course at College of Charleston and works with students from the college in a variety of research efforts sponsored by the Conservancy.”

Roland enjoyed his career as a forensic CPA, and it was his work that first led him to Kiawah. “I was living in Charlotte and after Hurricane Hugo in 1989, I was sent to Charleston. Coincidentally, someone put a flyer in our mailbox about renting a villa here, and so we did. We came for a visit and after one week I knew I wanted to buy here. My kids have grown up coming here and they all worked here between college and grad school.”

As a CPA, Roland says, “I chased money losses. I saw a lot of bad stuff, but some good.” He recalls a woman who was caught embezzling and was a long-time friend of the company owner. When pressed about why she had done it, she said she began in order to send her daughter to college and continued when her husband became ill and they couldn’t pay the medical bills. Her husband and daughter knew nothing about her illicit activities, and she promised to repay the funds. The owner declined to press charges.

Roland became involved with the Conservancy through golf. “I joined a golf group to meet people. Two of them volunteered with the Conservancy and said they needed financial expertise.” His commitment has become a long one. He was initially appointed assistant treasurer and served on the Business, Tax and Legal Affairs Committee. He then spent a year as treasurer, two years as vice chair, is now in his second year as chair, and will spend two years as immediate past chair with some administrative responsibilities.

During COVID, Roland worked on a plan to protect Kiawah Island by seeking new conservation easements and involving as many people as possible. Conservation easements protect the land from development forever and offer the donor a significant tax break. “Kiawah is almost built out and not much land is left to preserve. We consider the whole ecological environment here, including the watershed, even beyond the front gate.” In 2022, the Conservancy has already preserved four new properties, and is working on preserving several additional areas before the end of the year. For each easement, staff walks and studies the property; conducts ecological testing; and catalogs the flora and fauna. Under Roland’s leadership, the Conservancy established a new 2030 Strategic plan and introduced the “RSVP Kiawah” initiative: Respect wildlife, Support ecological health, Volunteer in environmental efforts, Protect native habitat.

Roland previously volunteered with other Kiawah entities. He was on the KICA finance committee and later the town audit committee, and he worked on the Town of Kiawah Island’s financial controls.

His work with the Conservancy leaves plenty of time for recreation and relaxation. Roland belongs to three golfing groups and plays about four times a week. He also enjoys fishing, crabbing in the warm months, biking and walking—often with his wife, and sitting on the beach with a book in the late afternoons.

Roland noted that the Conservancy is the largest holder of preserved land on Kiawah. “When you go through the gate, it’s almost like going into paradise. We have a great place here, and everyone knows it. Let’s enjoy it.”