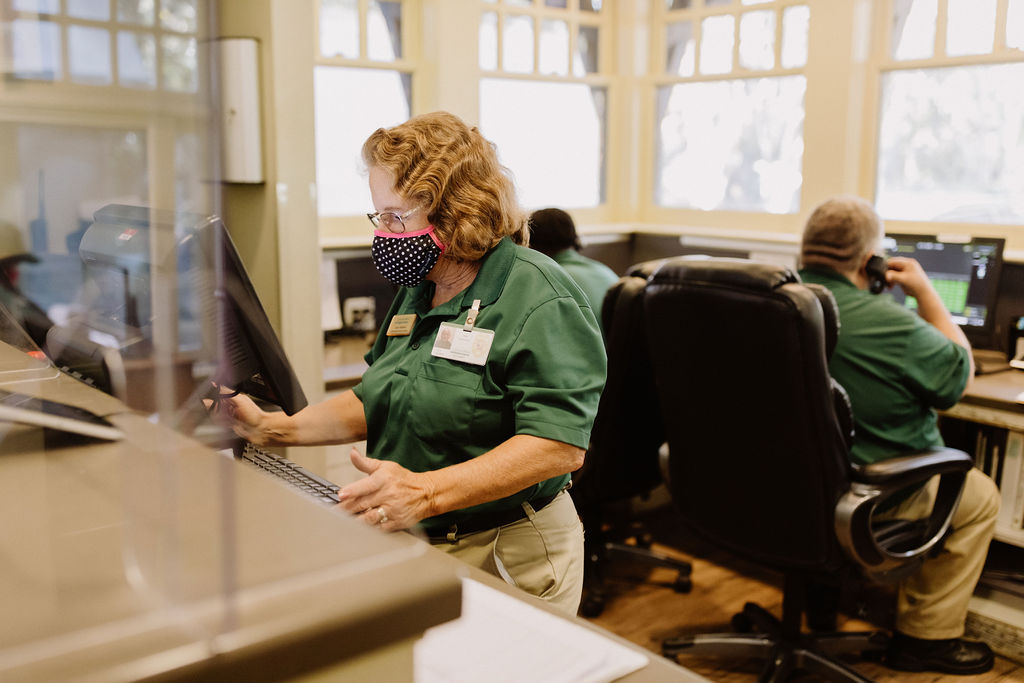 The 2021 PGA Championship was a major undertaking for the entire island, with all entities collaborating to contribute to a fantastic event. Now that we can look back at a highly successful (and surprising!) week of top-level golf, we’d like to highlight the contributions KICA’s staff in all departments made in advance of the event. Overall, staff issued 4,741 credentials to member families, 6,419 to member guests and 5,463 to renters. The week of the championship, KICA’s approximately 90 employees worked over 5,000 hours! Since some employees are salary rather than hourly, this figure isn’t exact but for reference, last week the same number of employees worked 3,094 hours.

The member services team mailed 6,419 individual credentials to member guests in April. Staff from Recreation, Livability and Land Management also pitched in to help the team get everything sorted and mailed. They also deftly worked with members whose credentials were slowed down by the inconsistent postal service. RoShonda Brown and Nancy Root maintained a running list of which municipalities were having problems with delayed mail delivery: New Jersey was, the UK wasn’t. Our member services and security teams bent over backwards to ensure that members and their guests got their credential hang tags in advance of the event.

Because KICA’s pass operations moved off-site for the event, KICA’s IT department needed to set up a whole new office that would seamlessly function 24/7 during the week. The team set up and configured computers, printers, WiFi and wired internet, as well as power and internet hotspot backups to ensure there were no interruptions. Information Systems Supervisor Dan Kokkos reported that, “planning and anticipating these things led to great success. We did not have any issues reported throughout the week.”

KICA’s Communications team worked for months to ensure that members, guests, contractors and island employees had all the information they needed for the week of the championship. That included mailing letters to all members and contractors, facilitating the requesting of credentials, and distributing information in print, emails, text alerts and on the web.

KICA’s Livability Department had a big task before the departure of most contractors and all island construction in the days before the tournament. The department had to ensure that contractors left the island in top shape, with nothing staged on work sites around the island. The department also stepped up their review of island sight lines to ensure that vehicular views were not interrupted by the island’s foliage.

Making sure all posts were staffed, KICA’s Security team was all-hands-on-deck for the duration of the event. Director of Security Tony Elder also served as KICA’s liaison to the PGA Championship, ensuring that both the PGA’s and members’ needs were met in the process. The team worked with all other departments and entities, as well as local law enforcement and federal authorities. Tony expressed his gratitude for how the whole KICA team worked together during the expected pressures from a high-profile event. During the event, Tony and Assistant Director of Security Kelly Kraus authorized 166 contractors for emergency repairs on the island.

The Commercial Pass Office pulled up stakes and moved to a temporary location. It wasn’t the first time for commercial access administrator Kim Walker, who was here for the 2012 event as well. While they usually deal with commercial access only, for event week, the staff handled access requests from everyone who didn’t have credentials in advance. The office opened at 5:30 a.m. Monday, May 17 and didn’t close until Sunday, May 23 at 10 p.m.

This team also ensured that authorized commercial access providers received their credentials in advance in the weeks prior to the event. Though most commercial work was prohibited during the event, the team issued 860 credentials to authorized contractors (deliveries, food service and fuel deliveries, and specific home services).

Security CSAs staff KICA’s two security gates 24 hours a day, every single day of the year. CSAs at the Main Gate are often the very first interaction that members and guests have when coming to the island. Still, an event like this is always a challenge. Prioritization of coverage for the event meant that team members worked 12-hour shifts and were on-site every day of the championship with no days off. Staff took the increased traffic from buses, media, and PGA deliveries in stride, assisting members and public safety in keeping the island’s traffic flowing while maintaining access control. While there were a few challenges and opportunities for enhancement during this international event, members reported how easy it was to access and enjoy around the island.

KICA’s Land Management Department planned their PGA needs far in advance so they would have time for plantings and turf to grow in before the event. In 2020, crews tackled landscaping updates throughout Kiawah’s visually prominent interior corridor, and plantings continued until Mother’s Day weekend. Annual pine straw was put out on the island in April and May.

Land Management Supervisor Leila Gable planned the colorful, eye-catching plants that were planted around the island after the frost risk has gone for 2021. Leila picked plants in colors similar to those that appear in the PGA’s logo: white, gold and deep blue. The blue flowers had an added bonus: pollinators were more attracted to the petals!

During the event, Land Management crews were on the island on rotating shifts, with some in as early as 3:30 a.m., in order to be ahead of bus schedules. These crews kept the island looking its best, mowing, blowing off roadways and leisure trails, and applying deer repellent to the plants that deer inevitably found tasty.

The Lakes Management Department worked in advance to get the island’s ponds camera-ready and proactively treated the island for mosquitoes prior to the event.

As biologists, the Lakes Department also manages the island’s wildlife calls. In anticipation of possible wildlife concerns with so many guests and members on the island, they extended their hours for greater coverage. Their caution turned out to be warranted when they received a call for an Anhinga with an entangled beak at The Ocean Course during live play. The Lakes team were escorted to Hole 17 where they captured the bird in front of the attentive (and quiet) golf crowd. Lakes biologist James Wilson netted the bird to cheers and the team was able to free the bird from its entanglement, which had wrapped around its serrated beak. The bird was returned to the course in good condition, again to cheers from the concerned audience.

The MR&R team knew far in advance that they wouldn’t be able to work on KICA’s flood mitigation projects prior to the event, but they still had a lot on their plate. Starting in February, the team planned and oversaw the widening and resurfacing of a four-mile section of leisure trail that runs parallel to the parkway from Beachwalker Drive to the Vanderhorst Gate, and along Governors Drive to the intersection of Flyway Drive. The beautiful reworked leisure trail is already a hit with members. Concurrently, they also managed the repaving of Governors Drive. During the event, they also tackled emergency infrastructure repairs without major disruption to the island.

KICA’s Recreation department got in on the action, opening the oceanside Sandbar early for members to watch the championship on the big screen. The Sandbar, which usually opens Memorial Day weekend, received lots of interest from members who avoided the event crowds and enjoyed the stellar weather poolside.