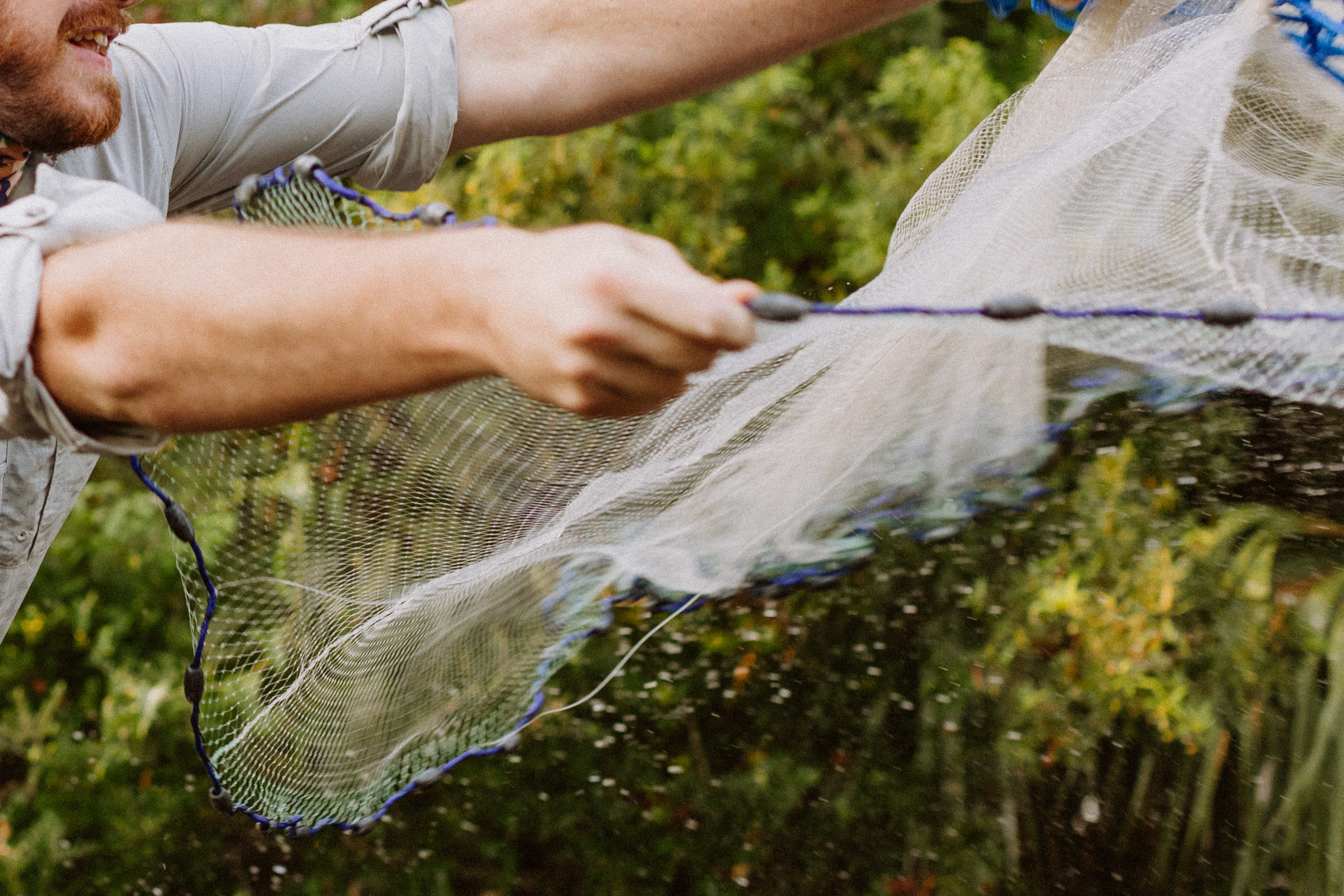 Kiawah’s biome and wildlife are so important to our community that several full-time biologists work for the Kiawah Island Community Association (KICA) and the Town of Kiawah Island to protect and monitor them, including managing the effects of people. KICA and town employees collaborate closely with each other in their efforts, as well as their counterparts at other island entities.

Like many other KICA and town roles, the duties of the biologists overlap significantly. When the town hired Jim Jordan as wildlife biologist in 2000, he assumed responsibility for island wildlife management and related public safety matters within the town’s borders. In 2008, Aaron Given joined him as the town’s assistant wildlife biologist and ornithology expert. 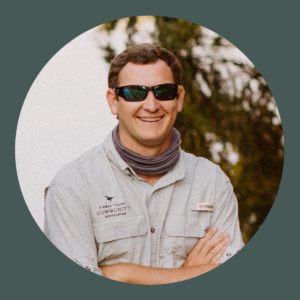 In 2014, KICA added Matt Hill to its team of biologists, which was first created in 1991. Now as the Lakes supervisor, Matt oversees all wildlife within KICA’s property, including the pond system, and addresses mosquito abatement, pond health, and other biological health management. Three additional KICA staff members report to him.

The biologists have an array of duties other than managing wildlife. Jim’s responsibilities fall under an umbrella of public safety and primarily include animals outside of ponds and waterways, beach health, island plants, and more. His days are busy with tasks such as deer population surveys, bobcat tracking and research, monitoring beach erosion and accretion, and elimination of invasive plants such as tallow trees. As research expanded 10-15 years ago, Aaron joined the staff. “We realized we were contracting out a lot of projects and also that we needed more expertise in birds, and a banding permit, which requires special training and a license,” said Jim. He noted that no other municipalities in South Carolina have wildlife biologists on staff; the Town of Kiawah Island has two.

Matt deals with anything water-related, including stormwater management, pond levels and water quality. “The ponds look nice and inviting, but that’s not their primary purpose,” he cautioned. “They are designed to capture stormwater and filter out pollutants, such as fertilizer, solid debris and algal blooms.” His work also encompasses deer, bobcats, wading birds, fish and alligators.

“Despite all the development and tourism, our ecosystem is vibrant and close to what it was 50-100 years ago,” Jim commented. “The biggest change is in the bobcat population.” He has done bobcat research for 25 years and documented the negative impacts of the use of anticoagulant rodenticides for the last three. “Their use has increased exponentially, and they can cause significant secondary impacts to predators and birds of prey,” he said. He is pleased to have seen no direct bobcat mortalities from anticoagulants in the last two years, largely attributable to the town’s Bobcat Guardian Program.

Having multiple biologists on the island is especially helpful when it comes to dealing with wildlife. “We keep an online log of wildlife—including gator—calls and both monitor the list. When a wildlife call comes in to one of us, who handles it might depend on who is where on the island,” said Jim. Collaborations include animal surveys, alligator movement and removal when deemed necessary, fish testing every autumn to be sure they are safe to eat, and checking wildlife for pesticides and lead levels.

The town and community association share the responsibilities of alligator management in a coordinated effort. When Matt joined the KICA staff, he continued alligator research. He takes liver samples and continues to examine lead levels, anticoagulants (rat poisons) and heavy metals in their blood. “We are finding some of the highest lead levels in the scientific record,” he said. “The gators find and eat lead fishing and crabbing weights. We have pulled a lot of lead out of euthanized gators.” Alligators are not picky eaters; patrons of the 2012 PGA championship who saw one consume a camera placed near the edge of the dunes might understand that propensity.

Alligators have a wide territory and can range for miles, especially males. “They use the pond system as a highway,” Jim said. “One swam from Turtle Point to the east end of the island,” a fact they learned from a GPS monitor attached to the alligator’s head. The animals like to winter in the pipes that connect the island lakes because the ground provides a measure of insulation.

Kiawah does not cull alligators or relocate them to other areas. Matt said, “They control their population size themselves, adapting to available habitat and food. The big ones eat the little ones if there are too many. Their only natural predator once they become three feet or greater, except for the occasional car, is another gator.”

The exception is “nuisance alligators,” those who have lost their fear of humans, typically because they have been fed. Alligators cannot distinguish between food that a human offers and the person offering it, hence the saying, “A fed ‘gator is a dead ‘gator.” After being identified and evaluated, these alligators are captured and euthanized. In a typical year, 5-10 alligators are removed for this reason, but the number has been as high as 16.

The biologists’ management responsibilities also extend to people, especially vacationers. “I’ve seen someone with an arm around a deer. Deer are powerful and can hurt you,” said Matt. “Few people in the U.S. live around gators. A visitor bikes to the beach, sees a gator, and throws a cracker at it to take a photo, then moves on with no concern for the effect on the gator.” Matt and Jim work together to ensure that there is a wide net of signage near ponds and to reduce interaction through physical means where possible, like removing benches from pond edges.

Matt and his team also deal with other human problems: litter and debris dumped in storm drains. “If a contractor empties something into a storm drain, it goes right into KICA’s drainage system and into a pond.”

Jim and Matt field daily calls and emails from vacationers and homeowners. “Living with nature is a great idea although sometimes it can be too close to home,” said Jim. They have removed a gator from a fountain; handled snake calls; helped the Nature Center catch a red-tailed hawk with a broken wing; rescued a homeowner’s dog when the dog fell off a bulkhead and the homeowner got stuck in pluff mud trying to go after it; and, watched by a crowd of at least 150 people, captured an alligator in the surf near the Sanctuary. “Managing the balance of people, plants and wildlife is a wild ride,” Jim noted.

Matt grew up enjoying the outdoors and the wildlife in the Charleston area, fishing, hunting and boating. He earned a degree in Marine Biology from College of Charleston and holds a Master Pond Manager certification through Clemson University. Before coming to Kiawah, he held several biology-related positions. Matt, with a wife and two young children, stays busy outside of work. “My free time is more limited with a young and active family. One bonus of my job with KICA is that I spend a lot of time outdoors at work, and can spend time with my family at home.”

Jim is also a South Carolina native who always loved the outdoors and grew up fishing and hunting. He earned a biology degree from Furman and a master’s in Wildlife Ecology and Management from the University of Georgia. He did his master’s thesis on bobcats on Kiawah and then began a deer fertility control project as a consultant to the town. During that time, he also began responding to wildlife calls and eventually helped write the job description for what became his current position. “The two things I wanted to be when I grew up were a Major League baseball player and a wildlife biologist,” he commented. He still enjoys playing and coaching baseball  and has two young teenagers who play sports.

Jim and Matt love their jobs. “I get to do what I love every day,” Jim said.  He likes the flexibility of his work, which is different from a typical biologist position in which advancement requires increasing office work and decreasing field work.

Matt said, “I always knew I would do something in the field of biology. This job allows me to do that in a unique setting. In four days recently, I dealt with four different species of animals.”