Flood Mitigation Projects Off To a Great Start 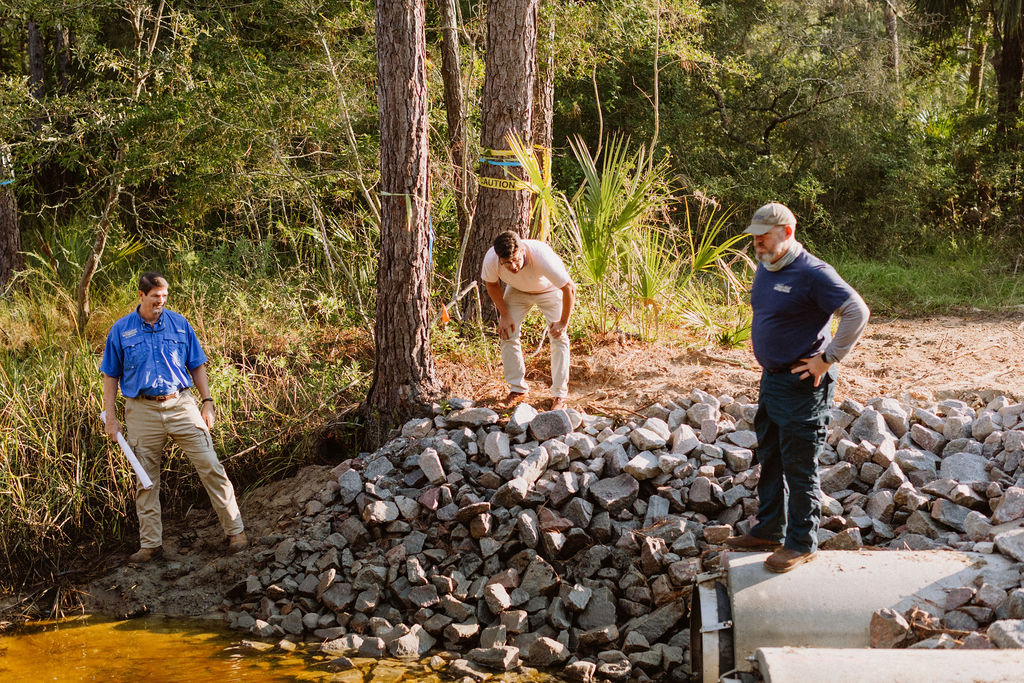 2020 has been a pivotal year for water resilience on Kiawah. After months of work assessing island flooding, KICA’s Water Management Task Force presented a proposal at the Annual Meeting in March. This package was an ambitious group of projects designed to alleviate or eliminate flooding at key points along the island’s major roadways, a fundamental concern for members.

Even in the midst of a pandemic, the membership clearly saw the urgency of these projects. The proposal was approved with a resounding 82% members in favor and KICA began working on the projects later that month in order to meet the proposed time frame: all projects completed by the end of 2022. In fact, KICA had permits in hand for the first projects before members received their first Flood Mitigation assessments in June. 6 months later, the most critical project has been completed and the core of a second project has been successfully accomplished. This initial work has been on time and under budget. Please continue reading for details and an update on the entire water management initiative.

When the task force reviewed the island’s drainage issues, KICA’s staff engineers identified one problem with widespread consequences. The island had a bottleneck that had to be resolved. Thirty-seven of KICA’s ponds drained through a single exit point, with water in the furthest ponds traveling three miles to the Beachwalker outfall in Inlet Cove. A significant rainfall could overwhelm the drainage system, creating hazardous flooding on Kiawah Island Parkway, as well as other secondary roads in the center of the island. The task force proposed an entirely new outfall to divide the drainage basin and relieve the eastern side of the Beachwalker system.

This new outfall structure was at the top of the list when the project timeline was developed. The pond 30 outfall structure and connecting drainage infrastructure are now complete. Water on the north side of the parkway from the Settlement neighborhood now travels one mile to exit through the new outfall, instead of three miles to Inlet Cove. Most critically, the V-gate intersection is supported by this new outfall structure; previously, this area was the last to drain in the Beachwalker system. A berm at the new outfall site prevents water from entering the drainage system and contributing to flooding on the Kiawah Island Parkway during the higher tide cycles being experienced on the island.

In the recent rainy weather Kiawah experienced in mid-November, KICA’s resilience specialist received no flood reports from members, despite approximately 3.25 inches of rain falling steadily over three days. The results are clear: Kiawah Island Parkway did not flood in the area the Pond 30 outfall was intended to effect. During that time, tide levels reached were actually higher than accounted for in the study, reaching 8 ft. on Friday, Nov. 13.

While this project’s heavy construction is completed, underway now is an extensive landscape restoration project of the area. This is scheduled to be completed in 2020.

The project at Trumpet Creeper is really three phases of interrelated projects that work together to tackle flooding at three areas of Governors Drive. The first and most crucial phase was addressing the Trumpet Creeper inlet. Filled with decades of sediment, the inlet’s baseline level made it nearly impossible for the outflow pipes at that location to drain without significant pressure from upstream. A convoluted system of pipes compounded the problem. The task force recommended a series of changes that commenced with dredging the inlet to allow for optimized flow in the area.

Dredging the inlet was a top priority, as it was the most critical element for success in this area, and this phase of the project is successfully completed. The newly-dredged inlet optimized outflow, with effects further up the system as well.

Two phases of the project remain: (1) repairing drainage pipes that empty into the inlet, and (2) installing new pipes, an outfall box and a weir structure to reroute old, convoluted ones. This work is expected to start in late 2021.

Repairs on existing pipes will not be paid for out of the flood mitigation assessment, as that project takes place on existing infrastructure. This work will be done as part of KICA’s regular reserve projects and is intended to begin in 2021.

While there is still a long way to go to accomplish the entire list of projects, the decision to start with the most widely-beneficial seems to have paid off. Construction on task force projects is mostly complete for 2020, but work is still underway on planning, engineering and permitting these projects. Projects will begin again in 2021 after the May PGA Championship, and KICA is on-track to have all projects completed in late 2022.

When the membership approved the projects in May, they also approved a new, limited special assessment to pay for these new infrastructure projects. KICA has no funding source for new infrastructure. The Flood Mitigation Assessment is billed in June to all members and will be billed annually through 2024. The task force was deliberate with the language of this assessment, ensuring that it had a limited time frame and went only toward designated projects. All payments for the assessment are allocated for flood mitigation. If a project is completed for less than the estimated cost, all remaining funds for task force projects will be allocated to other flood mitigation work; these funds will not go into KICA’s operating or reserve budgets.

Several other final expenses are anticipated before the end of the year, as the project is awaiting final inspection by the ARB. Landscape mitigation to bring the construction site back to Kiawah standards will finish by Friday, Dec. 4, with a cost of $97,836. An additional $138,500 for the balance of the infrastructure construction contract will also be paid in 2020.

Currently, KICA has spent $320,733 for permitting, drafting, surveying, dredging and landscape mitigation for the Trumpet Creeper inlet (Project 6A), almost exactly $100,000 less than the initial estimate of $420,000. This phase of the project is complete and awaiting final inspection.

The careful allocation of resources and efficiency on the work so far has put KICA in a favorable budget position.

Planning, engineering, surveying and permitting for future projects cost $16,750. See below for a summary of those projects and costs.

The total cost of project 6 was estimated to be $923,000. Due to the savings on the initial phase of this project, that amount may be less than projected.