IF YOU WITNESS FEEDING OR HARASSING AN ALLIGATOR, CONTACT:

Imagine the world 150 million years ago and you’re probably going to think of one thing: dinosaurs. Some recognizable names from that epoch are the Tyrannosaurus Rex and the earliest known bird ancestor, Archaeopteryx. Another name from that period might be even more familiar to residents and visitors to the American southeast: alligator.

Look around the Lowcountry today and you’ll see American alligators haven’t changed all that much from their ancient ancestors. Alligators are ectothermic; they depend on an outside source for their body heat. As a result, an alligator’s activity level varies with the outside temperature. The spring, summer and late fall are when alligators are the most active, as their bodies are warm enough for more movement. People often see them lying in sunny spots, immobile. This can make people assume they are lazy or slow, but they are neither.

Alligators are efficient predators, and these carnivores prey on any animal that is available. According to the South Carolina Department of Natural Resources (SC DNR), juvenile alligators (less than 4 feet) eat crustaceans, snails, and small fish. Sub-adults (4 to 6 feet) eat fish, crustaceans, small mammals, and birds. Adults (greater than 6 feet) eat fish, mammals (including deer, cats and dogs), turtles, birds, and other alligators. Due to strength and speed, alligators can attack pets that are near pond edges, interpreting them as prey.

With few predators to threaten them after reaching maturity, alligators live 25-50 years in the wild but that’s not the end of their possible lifespan. An alligator named Muja, thought to be the world’s oldest alligator, has been at the Belgrade Zoo since 1937. Muja even managed to survive World War II safely, despite the fact that Belgrade was bombed twice and the zoo almost entirely destroyed. While that is an astonishing lifespan, Kiawah regularly sees alligators in their 30s and 40s.

Alligators in Our Midst

Living with alligators requires vigilant awareness, respect and caution. Kiawah was intentionally developed to integrate closely with our incredible natural surroundings and wildlife, and with that, precautions must be taken. Alligators are naturally fearful of humans and will retreat in close proximity unless they have been fed or harassed. Alligator attacks are rare, with only three known fatalities ever reported in South Carolina, but these animals must be treated with caution. Never approach an alligator, whether on a path or on a golf course. Keep children and pets away from pond edges.

Sometimes during the year, alligators are more visible on the island. Seeing these large animals on leisure trails and pond edges can be both exciting and a little frightening. Make sure to maintain a distance of at least 60 feet from an alligator when you encounter one.

Alligators generally begin courting in April, followed by mating in late May and early June. During this time, you may hear the males bellowing in ponds, signaling to the females that they are ready to mate. You may also see alligators on the move more, crossing roads and leisure trails to visit other ponds. In June and July, female alligators are laying eggs and creating nests in secluded areas, which can also create increased activity. While it’s always important to put distance between you and an alligator, please be especially mindful in April through July.

The American alligator is a protected species and, in South Carolina, it is illegal to harass, feed or relocate an alligator. Limited hunting and euthanasia of nuisance individuals is allowed with the oversight of SC DNR.

The town and community association share the responsibilities of alligator management in a coordinated effort. Over the last decade, Kiawah’s alligator population has remained relatively stable, which indicates a healthy ecosystem with balanced resources. Kiawah averages about one mature alligator (six feet in length or larger) for every three acres of pond surface area.

Biologists who work with the Town of Kiawah Island and KICA monitor the island alligator population on a continuous basis and perform evaluations on alligators that are acting abnormally. Every alligator reported by members undergoes an evaluation with an island biologist. The biologists use their experience to run several tests and afterward, any alligator that demonstrates it has lost its fear of humans is euthanized.

In 2019, the town formed a committee of included members, the Kiawah Island Golf Resort, town and KICA biologists, and an alligator research specialist from Clemson University to audit Kiawah’s alligator management practices. In 2020, the committee recommended increased alligator safety and educational communications but had no changes to the island’s management protocol. The committee confirmed the alligator population is healthy and self-regulates, and any culling could disturb this balance and increase alligator issues. When the committee met in 2021, they did not recommend any additional changes.

In 2020, KICA’s biologist and resilience specialist developed a mapping overlay that allows the biologists to see the location of alligator signage on the island and anticipate areas where additional signage might be beneficial. Using the information provided by this program, the Lakes Management team added 50 new signs, for a total of 156 alligator safety signs throughout Kiawah Island. The signs read, “Warning: Alligators. It is illegal to feed or harass alligators. Report violations to KICA Security at 843-768-5566.”

Biologists at KICA and the town are also tagging alligators to help learn more about individual animals. Tags help to identify individuals, enabling biologists to look at growth rates, home ranges, travel, and overall health. This program is part of the island’s ongoing alligator research. 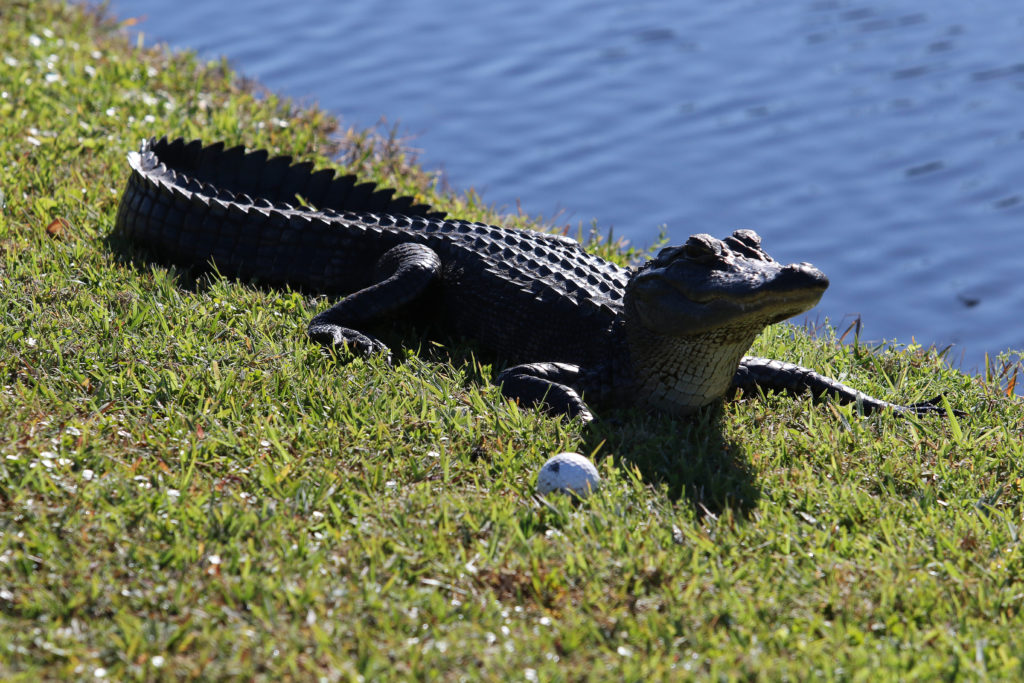 Each of Kiawah’s entities plays an important role in alligator awareness on the island and works with its audience to promote safety. The town and KICA directly monitor the population, and determine the policies that the island puts into place. Both entities also communicate with residents and members, including guests, about the dangers of interacting with alligators. KICA’s property owner guest pass includes a printed warning on the back, and an alligator safety flyer is distributed by rental agents. The Kiawah Conservancy contributes to research and puts out a wealth of information on these animals (visit KiawahConservancy.org and view the alligator safety video on their YouTube channel). The Kiawah Island Golf Resort and the Kiawah Island Club promote safety to golfers with information and signage on courses warning them to stay clear.

Alligator safety is a community commitment and it requires community member participation. If you are concerned about the behavior of an alligator, contact the town at 843-768-9166 during business hours or KICA security after-hours at 843-768-5566. All reported alligators will be evaluated by an island biologist. If there is any indication the gator is not fearful of humans, it will be euthanized.

Remind your guests and neighbors to respect the alligators. If you rent your property, provide education to your renters. The safety of this community is our highest priority. Below is a link to KICA’s Alligator Safety flyer as well as the Town of Kiawah Island’s alligator information. These are great links to provide to renters and guests prior to their visit.